I wrote this in June of 2010 and rereading it, there’s nothing I would change.

Songs Which Defined A Decade

Thanks to my twitter follower and friend @chrism799 for the idea for this blog entry. He tweeted asking about favorite song from the ’80s, and my response was  that the ’80s defined my life and musical tastes and I couldn’t pick just one. He suggested making a list, and so here it is. This is by no means a definitive list, but simply the 25 songs that made an impact on me in some way. I’m relying only on memory for the songs, but have looked up the year they were released. They’re in no particular order and when available I’m providing the youtube link.

1. Relax – Frankie Goes to Hollywood (1982) This was actually the first song that came to mind when Chris asked the question. I’m not sure why, other than it seems to typify the overblown, overly dramatic dance music that many think of when the ’80s are mentioned. Oh I guess the the theme of the song, having an Orgasm had something to do with it, but it was a great song then and still holds up today. http://www.youtube.com/watch?v=kV5SJgWoDOs.

2. Abacab – Genesis (1981) The first album of the ’80s by Genesis, saw a much stripped down and poppier release than anything else previously. Gone were the prog rock songs from the Gabriel era, and yet Abacab is one of the last vestiges of the days gone by. I much prefer a live version of this song, as it packs more punch, and it features Phil singing at his screaming best.  In this youtube clip when Phil goes back on the drumkit and plays along with Chester Thompson is nothing short of breathtaking. http://www.youtube.com/watch?v=dk4OVoJZrBU&feature=related

3. In the Air Tonight – Phil Collins(1982) I might be double dipping here and there, but truly one of the classic songs from that decade was In the Air Tonight; not just for the booming drums, but also for all the urban myths surrounding the lyrics and what they meant. Again another live performance with more stellar drumming from Phil and Chester. http://www.youtube.com/watch?v=G82VUCzrhQo&feature=related

4. White Wedding Part 1 -Billy Idol (1982) Billy Idol was my first MTV crush. The first time I saw him, and this video, I got a raging hardon that wouldn’t go away. From the platinum blonde hair, to the sneer, and the leather pants, Idol and this song oozes hard, hot sweaty sex. http://www.youtube.com/watch?v=AAZQaYKZMTI&feature=fvst

5. Script for a Jester’s Tear – Marillion(1983) This is simply one of the best songs by one of the best bands with one of the best singers I’ve ever heard. Anyone who knows me well, knows my absolute unadorned love for the early Marillion music, and Fish, the lead singer (who will make an appearance on the list later) in particular. For me this will always be a song tied to a bad breakup for me in 1990, but back in ’83 it was simply a catharsis I wouldn’t begin to comprehend. http://www.youtube.com/watch?v=gaBjdLQ0LJ0

8. Bela Lugosi’s Dead – Bahaus(1979) Ok technically not a song from the ’80s but close enough. Bahaus’ classic song is nothing short of what goth truly is, before it got filled with CUre wannabes. It’s sleek, sexy and dangerous.http://www.youtube.com/watch?v=gCWyYOOS8FQ&feature=related

9. Soft Cell – Tainted Love(1981) A remake of a Gloria Jones song from 1964 that went nowhere then, was revived and made not only a staple of ’80s collections, but a classic song period. The first link is for the Soft Cell version and the second is for the original version. http://www.youtube.com/watch?v=p3fCFkl-BFU&feature=fvsrhttp://www.youtube.com/watch?v=NSehtaY6k1U

10. Sex(I’m a…) – Berlin Yet another staple, but also one of the songs that immediately made me want to go out and get laid. As I said to Chris, More people fucked to Berlin in the ’80s than all the other groups combined.http://www.youtube.com/watch?v=raq8maAutAE

11. Shock the Monkey – Peter Gabriel(1982) I remember the first time I heard this song. I was on the bus going to school, sitting in the back drooling over Steve M and his surfer boy good looks. I hated it at first. Maybe it was the tinny speakers on the bus that the driver insisted on blaring music from, but it grated on my nerves. Then I saw the video and it all made sense. I think. 28 years later I still love this song and think Gabriel is simply one of the best musicians around. http://www.youtube.com/watch?v=bo9riZYUpTw

12. Breakaway – Big Pig (1988) Too obscure to even be a one hit wonder, Big Pig was an Australian group of 7 musicians who only used percussion and a synth, plus vocals. The results are simply stunning. My roommate Joe A. turned me onto them and I fell in love immediately. http://www.youtube.com/watch?v=gBCcnazy88U

13. Beds Are Burning – Midnight Oil(1987) Another Australian group, and one of the most politically motivated of the time (moreso even than U2). M.O. made caring about things cool again. http://www.youtube.com/watch?v=yiq5QK_SBqs&feature=related

14. AEIOU Sometimes Y – Ebn Ozn (1983) One of my favorite electronic bands, their one and only album was a masterpiece, with not one bad song on it (in my opinion) This was their biggest hit. I still know every single word. I’m very happy to say the whole album is available as a download on Amazon. That was long overdue! http://vodpod.com/watch/95181-ebn-ozn-aeiou-somet-y

15. Safety Dance – Men Without Hats (1982) This is one of those songs that everyone thinks of when they think of the ’8o’s music, and who can blame them? It’s a fun, silly little song that forces you to get up and dance.http://www.youtube.com/watch?v=AjPau5QYtYs

16, Too Shy – Kajagoogoo(1983) Known as much for their hair as their music, Too Shy was an early favorite of mine, and seemed to be played on MTV once an hour. Lead singer Limahl has an incredibly soft and sweet voice, and uses it to full effect here. http://www.youtube.com/watch?v=FKIs_6qc4cQ

17. Cliche – Fish (1990) Though technically not in the ’80s (well okay not in a year with an eight in it), I’d be remiss if I didn’t mention one of the very best songs from Fish’s debut solo album. Frank Usher’s guitar work is absolutely incredible, in this song that is as romantic as it is fresh and unsappy (if that’s not a word it should be).  http://www.youtube.com/watch?v=l5avmXNE59U

18. Hold Me Now – Thompson Twins(1983) Not only did lead singer Tom Bailey remind me of my b/f at the time Jim S, but his low seductive voice absolutely sent chills down my spine. The TT’s were one of those great bands that made a CD full of good to great songs that never made you regret picking up their work.http://www.youtube.com/watch?v=SpZ9gEKBoYI

19. Change – Tears for Fears(1983) Perhaps one of the more original of the new wave groups to come out of the ’80s, T4F  never made a truly bad record. Change came from their first album The Hurting, which also has its most famous song, “Mad World”. I happen to remember Change far better. http://www.youtube.com/watch?v=YZWAqZN-uJo

20. Dance Hall Days – Wang Chung (1984) I fell in love with this song when I first heard it, and it makes a great companion to the next song in the list as well. http://www.youtube.com/watch?v=V-xpJRwIA-Q

21. Come Dancing – The Kinks(1983) what can you say about seminal rock band The Kinks? They broke barriers with their song about a transvestite Lola in the ’60s and continued to produce classic music for decades. This is one of my absolute favorites from this time period. http://www.youtube.com/watch?v=gs2kFrGluKs

22. Let’s Dance – David Bowie(1983) I remember the first time I heard this was on our Senior SPring Fling for school. I was on a ferry going to Catalina Island, and I had to dance. I had to. http://www.youtube.com/watch?v=N4d7Wp9kKjA

23. Come On Eileen – Dexy’s Midnight Runners(1982) This song has been stuck in my head for almost 30 years. Now it’s your turn. http://www.youtube.com/watch?v=oc-P8oDuS0Q

24. Sweet Dreams(are made of this) Eurythmics(1983) What can I say about this one? It certainly played nonstop on my cassette player for a good long time. http://www.youtube.com/watch?v=qeMFqkcPYcg

25. Sunday Bloody Sunday – U2(1982) No list would be worth it’s salt without a mention of U2. The first song I ever heard from them was this one, and I was so blown away by its raw emotion, and political statement, it still rings with authenticity today. http://www.youtube.com/watch?v=TGwfh8agBc8

As I look at this list, I see a majority of the songs are from 81-84, and I think for me, as I was in high school those years, they certainly define everything musically for me. There are at least 25 more I could have added, but that has to be saved for another time.

As many who know me, both online and in person, are aware, my favorite singer is ex Marillion frontman Fish.  I became a huge fan when I first heard him sing on Misplaced Childhood, some 20 plus years ago. His departure from the band, and difficulty of getting his CD’s in the states, never deterred my enthusiasm for the man and his music.

This all culminated in my finally seeing him live this past July at the House of Blues in Hollywood, CA. The avatar I have on SL and Odark as well as one on my blog here are of Fish and myself. For me, it was liking meeting Stephen King or CLive Barker. It was a highpoint in my life, and one I will remember until I become worm food.

In an email this morning, Fish had this to say:

She took internal photos of my throat and vocal chords with an endoscope and pronounced that I didn’t have nodules.
I thought everything was going to be diagnosed as down to heavy usage and prescribed a rest from singing for a while.
Just as I thought I had an all clear she pointed out a white area on one of my chords and said “But this is worrying!”
As soon as I heard the phrase “irregular cell growth” my mind went cold and focused.
I knew what it meant.

Needless to say I was shocked. He then went on to write,

I was in hospital yesterday and had an examination under general anaesthetic which involved taking a biopsy from one of my vocal chords.
I now wait on the results.

Either way I have come to grips with this as much as I can under the circumstances.
In all honesty I am 50 year old, I smoke(d), drink, have a “colourful” history, have sung nearly 1700 gigs in 27 years and have conducted probably three times as many interviews. It’s like standing on the M1 and expecting not to be hit by a car  😀

I wish Fish and his fiance Katie nothing but the best. My thoughts go with the Big Man and his family, in hopes that everything comes out okay. 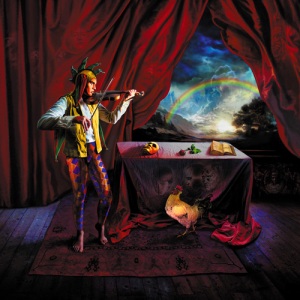 It’s official! The box set of some of Marillion’s early concerts will now be available on November 17th. All orders made directly from former lead singer Fish’s website will also receive an autographed copy of the cover (Mark Wilkinson is the artist,who also did the banner on my website-which is from Fish’s album 13th Star) by Mark, himself and the members of Marillion.

For those not familiar with their work, this is a great way to sample some of the best music of the 80’s.

They’ve been compared to early Genesis, King Crimson and every other progressive rock band you can think of; but they were (and still are)their own creature. I heard about them from a roommate, and I was an instant fan. While I don’t care for some of the more recent work, preferring Fish’s solo stuff much more, what’s packed into the 6 CD’s represents the best of the best. Check out Fish’s website for more info including track listings here: http://www.the-company.com/disco/daes.htm