It’s at this point in the series that everyone gets to call me a hypocrite. Why? Because I really like Jason Lives and its humor. Over the past five installments I’ve talked about how I’ve hated the attempts at humor and how it ruined the movies to an extent. I have no good reason to justify my liking  it here, so I won’t try, other than to say, I like what I like. By all rights, it shouldn’t work, but whether it’s the direction or delivery, it does. Sue me.

We have a new writer and director, Tom McLoughlin, who not only appears to love the series, but actually loves horror as well. Perhaps because he was known for comedy is why the humor works, but it also helps he wrote an interesting, engaging script with characters that weren’t Trump levels of stupid. We also have a new Tommy Jarvis (Thom Matthews from Return of the Living Dead fame) as the previous one had become a devout Christian. It’s a shame as this was a far better role and didn’t have you uttering, “Jesus fucking Christ, really? every five minutes.

Jason Lives starts off with Tommy Jarvis and Ron Palillo (aka Horseshack), running from the psych hospital they were at and off to dig up Jason so Tommy could burn his body. I’ll be honest it was very cool seeing Palillo even if he’s only alive for 5 minutes, I was just hoping we’d hear the trademark laugh he gave Horseshack in Welcome Back Kotter. Sadly that wasn’t to be. Jason is dug up, Tommy grabs a piece of iron and stabs Jason with it. And wouldn’t you know, that piece of metal acted like a lightning rod, and it brought maggot face back to life. Victor Frankenstein couldn’t have done it any better. Once he’s alive, Jason punches Palillo in the chest, pulling out his heart through the other side. It’s a pretty good effect and a great way to start off the movie. Tommy escapes and makes his way to the Sheriff’s office. Needless to say the Sheriff doesn’t believe him, and when he goes to grab a gun,  Sheriff Garris arrests him and throws him in a jail cell.

As that’s going on, a couple of camp counselors get lost on their way, and find Jason standing in the middle of the road with the metal rod. “I’ve seen enough horror movies to know that masked strangers are never good,” the woman says. When the male counselor pulls out a small gun from the glove compartment, and shoots Jason, it has no effect other than annoying him, and killing the both of them.

The next morning the Sheriff’s daughter and some of her friends who are counselors at the camp go to see him and ask for help in finding them. He says there’s nothing he can really so and basically blows her off. Tommy tries to warn them about Jason, but like the Sheriff he’s ignored, though it’s pretty apparent that Megan has the hots for him.

As all this is going on, there’s a paintball game happening in the woods because…why the hell, really? This scene features some inventive stuff including a triple beheading, and an arm being pulled out of its socket by accident. It’s kind of interesting seeing Jason just stare at the arm and I can imagine him saying in his best Urkel voice, “Did I do that?” He’s gotten far stronger than even he knew, which I guess may be a side effect of being undead. It’s also a point where past canon is sort of laid aside and the new testament of Jason (him being a supernatural creature, more than a human), of what he is begins. For any other franchise that would be the death knell, and in some ways I suppose it was, however, this sequel is so entertaining you don’t really think about it.

Unexpectedly to the camp counselors who are there, a bus load of kids arrives, and they’re caught not knowing what to do and improvise the best they can. This sets up a bit of tension as you wonder whether Jason will kill any of the little kids or not. This isn’t Season of the Witch, so it’s safe to say none of the kids are harmed. Physically anway, one can only imagine all the nightmares they’ll have. The Sheriff however is busy escorting Tommy out of the town limits with a warning not to come back.

No sooner does the Sheriff take off than Tommy heads back leading Garris on a chase to the cemetery, where, sadly for Tommy, the caretaker has already filled Jason’s grave back in. Just as a sidenote, when the drunken old caretaker is filling in the grave, he breaks the fourth wall and says straight into the camera, “Some folks have a strange idea about entertainment.” (or something similar, I’m paraphrasing). 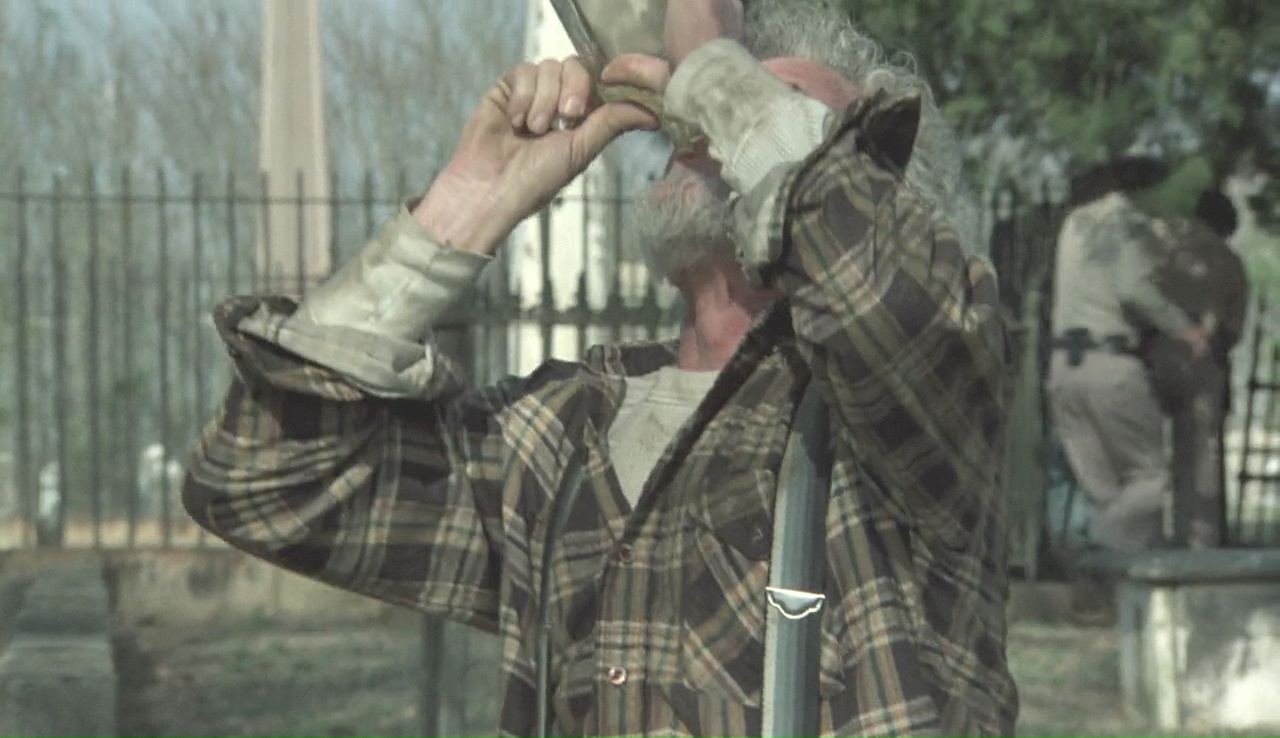 At some point Tommy manages to get to a bookstore abd pick up some books on the supernatural, and within those tomes finds the way to kill Jason, which sets up the final act that’s about as exciting and well done as anything in the series. It features one of the all time great kills when Jason literally snaps the Sheriff in half, bending his torso so his back touches his legs. Unfortunately it’s so poorly edited that you really don’t get to see much other than the end result.

In a departure from other entries, this one has as much of a happy ending as you could hope for, as Tommy and Megan survive and sort of ride off into the sunset, never to be heard from again. Meanwhile Jason is chained to a rock and stuck underwater, though he is still very much alive.

After the hot garbage of Part 5, anything would have been a relief, but it’s fortunate that what came after was a worthy sequel. I’d still rather see more that took itself seriously as the first one did, but if there has to be some lightness, six has done it the best. With a smart script, good acting, and lots of atmosphere, Six easily rises above the pack.

I give Friday the 16th Part 6: A New Beginning 7 machetes