Let me just get this out in the open right now. I really enjoyed Jason Takes Manhattan. I didn’t mean to, had planned on hating it, but damn if there isn’t something about it that I like. When folks talk about the least favorite F13 movie Manhattan usually tops the list, however I think it deserves a reevaluation, as there’s some really good stuff in there (as well as bad, which I’ll address). Kane Hodder returns as Jason, and dare I say it, he looks like he’s having a lot of fun this time around.  I admit when I first heard they were making this movie, I rolled my eyes and assumed they were really scraping the bottom of the barrel. Perhaps they were, and to many, they’d see it that way, but as I watched it again, it was like seeing a whole new film.

The movie opens with a voice over with shots of NYC in the background. All of those scenes are a foreshadowing of things to come and people we’ll see again, if not for very long. After the credits we then see two teens screwing around on a houseboat on Crystal Lake. It’s a stormy night (of course!), and when Jim drops the anchor, it gets wedged against underwater cables which break, and the electricity from them brings Jason back to life. Again. This time however he’s pretty waterlogged and squishy looking, but as strong as ever. So here we have the first two kills in the first 10 minutes of the movie, a good setup for the rest to come. There’s nearly 2 dozen kills in this one, and while some are done offscreen, many are pretty memorable.

Anyway, we then see a group of twenty something high school graduates boarding a yacht bound for NYC (When I say twenty something, I mean age, not the amount of teens). The logistics of this trip are probably best not thought about, just assume it was possible, and leave it at that. It’s probably one of the smallest graduating classes I’ve ever seen. Regardless all the typical stereotypes are represented, including this year’s addition, Rocker Chick. Of course Jason sneaks aboard, I mean what would a cruise be without a machete wielding maniac?

We also get to meet the main players: there’s Rennie the femme fatale, Sean who plays her wannabe boyfriend, Rennie’s asshole Uncle Charles who also happens to be a teacher and chaperone, and finally we have Mrs. Van Deusen another teacher, who I’m sure was called Van Douchen many times behind her back. Oh and there’s the geek with the video camera, but he’s not all that interesting to talk about, so I won’t. And almost forgot, we have the stuck up bitch as well, a definite holdover from the last movie.

Jason wastes no time in getting to work, and the first victim on the ship is Rocker Chick who is bludgeoned with her own guitar. To be honest, I can’t blame Jason for this one, her music was awful. His next victim is also one of my all time favorite kills in the entire series, not because it was especially graphic or unusual, it was just such a wtf moment. After some boxing workouts , one of the fighters hoes into the steam room and puts a towel over his face, as you do in these situations. Jason pops in, takes one of the hot rocks and jams it into the guy’s stomach giving him the first jeweled navel. I’m not sure what it is about this kill, but I love it. 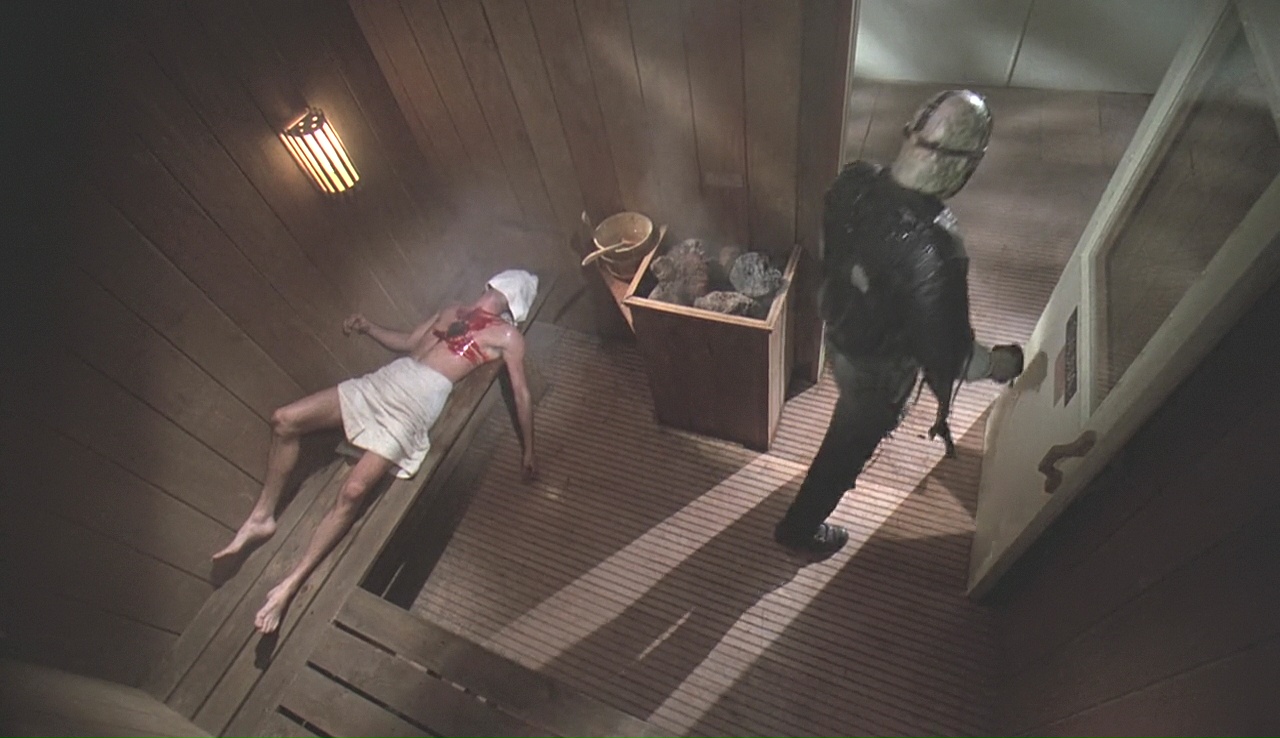 There’s a subplot of sorts with Rennie having either visions or hallucinations of Jason being drowned as a child. It’s later revealed that her asshole Uncle had tried to teach her to swim by throwing her into the lake, where Jason tried to drag her down with him. Poor Jason, never much of a ladies man, was he? I only mention it now, because I’ll more than likely forget about it later on. The thing is, when we see Jason for the first time as a kid, he looks perfectly normal. As the movie progresses we see him get more and more deformed. I’m not sure what the reason for that is; maybe being under the water did that? Who knows-it’s one of the many mysteries this movie offers with no real answer.

The next mystery is how exactly did Jason get to NYC. After killing everyone but the four main characters plus the token black guy, the yacht had been pretty much destroyed by fire. The heroes (for lack of a better word), end up rowing a life raft all the way to the Statue of Liberty. They get off the small dinghy, and we then see Jason rise from the water and crawl up onto the dock. Again, it’s one of those try not to think about it too much things. 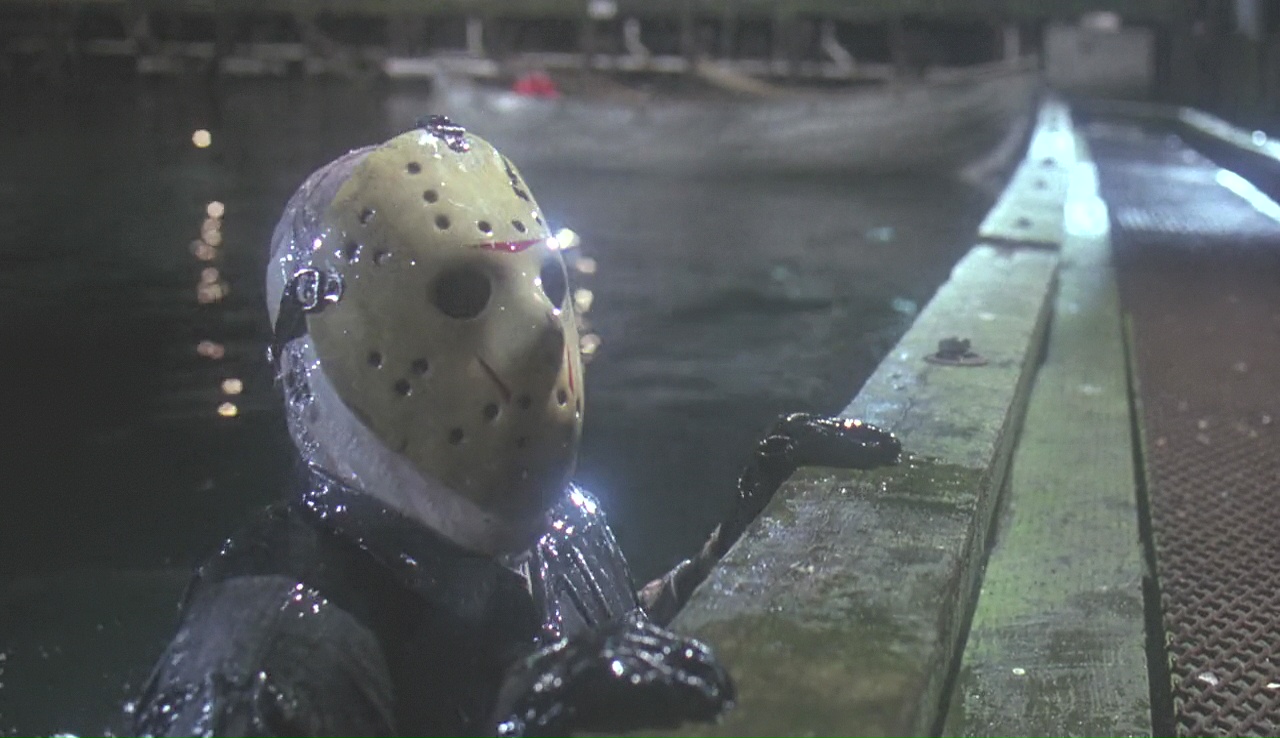 Rennie no sooner on the dock than she gets kidnapped by a couple of goons who inject her with Heroin and planning on a little rape action later on. Pissed they were cutting in on his action, Jason kills them both, allowing her to escape, no worse the wear from the drug she was shot up with. Apparently no one has ever taken heroin before, let alone shot up (the way we see one of the thugs doing it is laughable), because she would pretty much be on the nod for awhile. Regardless she catches up with her Uncle, her bf and other teacher. Julius is killed by Jason with one punch to the head, literally knocking it off. We then see it fly off the roof they were on, and land in a garbage bin. 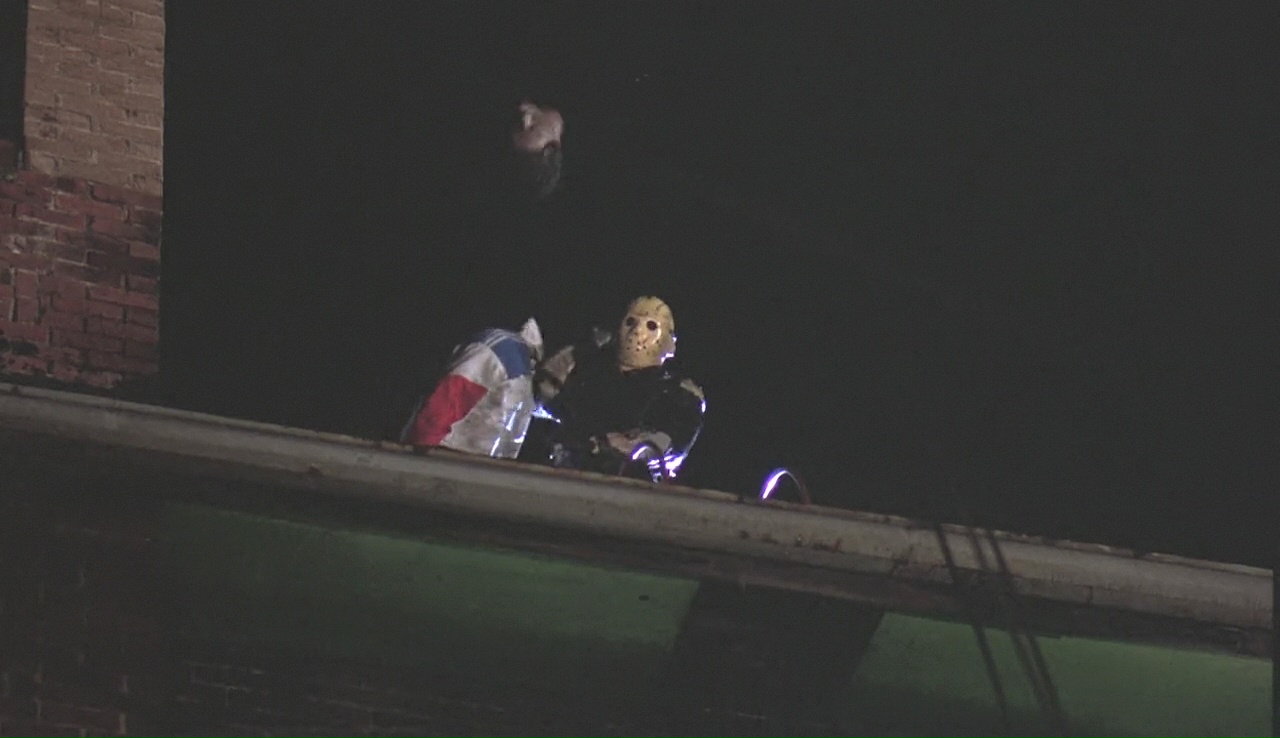 The culmination of all this mayhem lies in the sewers, where toxic waste runs through every night. Now why the puddles of it and the chemical smell doesn’t do anything to them, is yet another mystery. However, Jason is caught in a flood of the stuff, and when it runs its course, we see Jason, not as the disfigured man, but the normal child-as if he’d been stuck in a shell and was now free. Yeah, you guessed it, that’s yet another mystery. 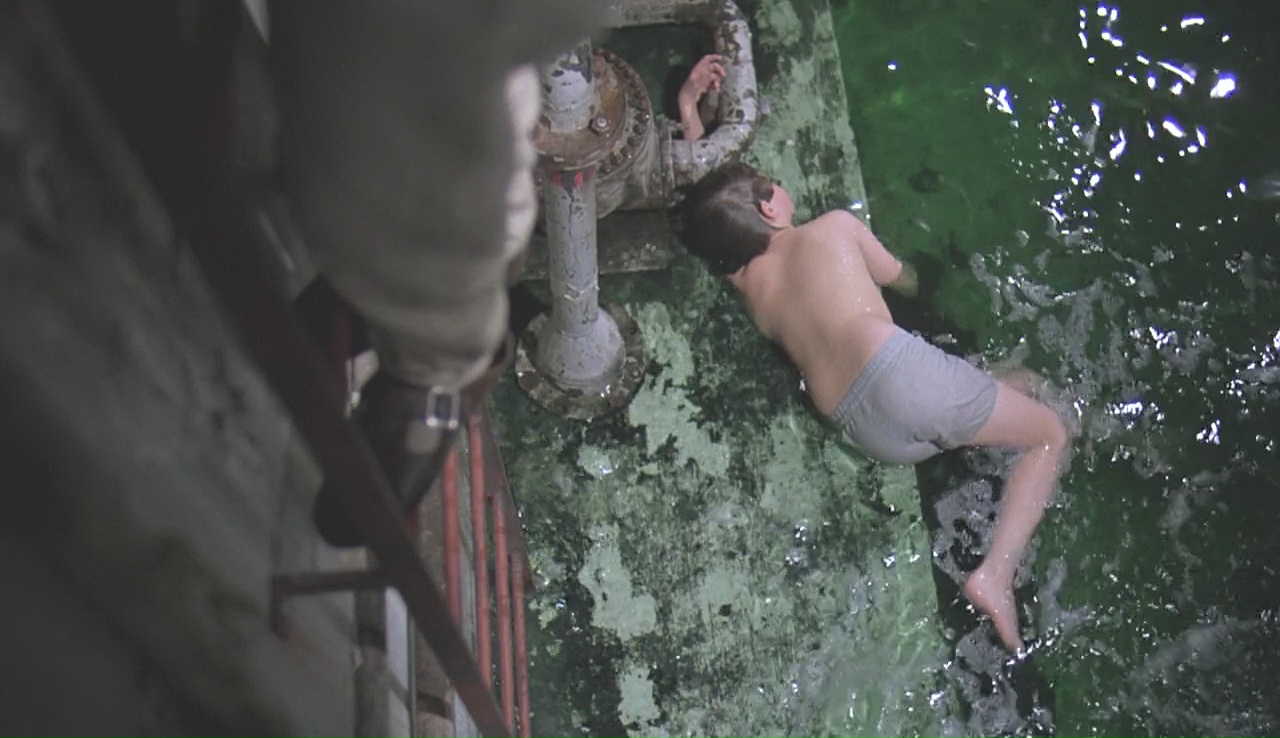 Jason takes Manhattan tries to play it straight for the most part, certainly more than some of the others. If the canon gets a little twisted, and things don’t make a lot of sense, it doesn’t matter because it’s a lot of fun. It’s one of the longest of the F13 movies, but it moves at a fast pace. It also looks fantastic, belying the small budget they had. As the writer and director, Rob Heddon did a good job, and it’s just sad the movie didn’t get the credit it deserves. It’s certainly the most underrated.