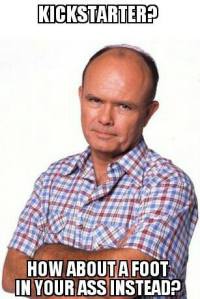 I’ve been online for a very long time, dating back to the bbs days in the mid ’80s. It started with The Rock Garden bbs and it’s blazing fast 1200bpm speed. I’ve also been a tech geek for just as long.  While I may not always have the latest toys, I know what they are and can talk about them with some knowledge (in fact I’m writing this on my Nexus 7 tablet).  As a writer I think it’s important to keep an eye on these things.  As tech changes so does the way we do things – if you don’t want to be left in the past’s dust that is.

I say all that as a way to segue into the topic of kickstarter – specifically as it relates to indie authors. I’m not picking on them because they’re self published, but most traditional publishers don’t go this route.

When originally started, kickstarter was a great tool, and a great way to get funding for projects that otherwise might not get funded. There have been a lot of successful and worthwhile projects that were produced.  And then the sharks, smelling the blood of the gullible, started circling. A feeding frenzy started and it seems to have only increased lately.  In the past day, I’ve seen two different pleas for donations for two different projects, but both pissed me off.

The first was for a website that would be publishing stories online, on a bimonthly basis. They say on the kickstarter page that authors will be paid pro rates – well anything leftover would go towards that is what they actually state. Where is most of the 4K they’re seeking going? Web hosting and design.  Yeah, I rolled my eyes at that as well.  A feeble minded sloth can create a damn good website for a fraction of that. And Web hosting? About as cheap a resource as you can find. Fortunately others see the problem with this as well, as it’s only raised $425 of the $4000 being asked for with 16 days left.

The second grab for your cash was from an indie author looking to finance his next self published opus.  He is asking for only $2000 for something he would have written whether kickstarter existed or not. He has 4 previous novels, all on amazon, but apparently hasn’t sold enough to fund a new book.

These are both ventures that would have been done regardless of outside financing. If you’re not willing to put the capital in, why should anyone else? It cheapens the Arts and gives the already maligned indies, a darker black eye.  Whether the Arts, or a business, if it can’t be made or succeed on its own, it definitely shouldn’t try to pick your pocket.

2 thoughts on “Kickstarter: A Rant”