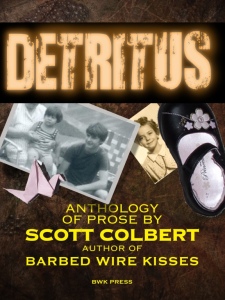 This is the new cover for Detritus, done once again by Joseph K. Adams, who did the revised cover for Barbed Wire Kisses. As stated in an earlier post, this is more or less a sampler of various types of writing. It starts off with an essay on Halloween, followed by my poem Forgotten Son, and ends with my short story Killer Weed. I’ll be putting this up at the usual online retailers for a paltry .99 cents.

Barbed Wire Kisses has been submitted to draft2digital, and once it’s available on BN, Kobo, and Apple I’ll let you all know. I’m also looking into having an audio version of BWK done as well.

This may be a good place to introduce yourself and your site or include some credits.