Mccain’s that is. Seems his campaign committee has already decided he won tonight’s debate with an ad placed in the Wall Street Journal online edition. Thanks to mudflats for this screenshot. 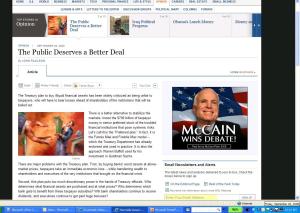 Seems to me that seeing into the future like that would be considered witchcraft to some; maybe Rev Muthee prayed over the wrong person.

This also goes to prove how desperate the McCain campaign is right now. He tries to worm his way out of the debate, in order to play the savior of wall street, and instead makes things worse. with a sharp drop in the polls, and Palin proving to be a rock around his chicken neck, McCain then decides to proclaim himself a winner in a debate he didn’t want in the first place.

It’s been one misstep after another for this campaign, and I applaud Obama for sticking to the important things, staying on message and being an intelligent, thoughtful candidate in the midst of a crisis. I was not an Obama supporter during the primaries, I liked Hillary. however when it became clear she would not get the nomination, I kind of lost interest in the race.

When Palin was picked for the VP slot, I got interested again. I started reading about Obama and watching his speeches on youtube. I’m impressed with him, and admit I may have been wrong in giving him short shrift in the primaries.

We’re past needing a Rambo mentality in charge. We need intelligence, and grace under pressure. Obama has shown this week, he has both, and Mccain has shown nothing but the receipt he got for selling his soul to the devil.

0 thoughts on “In his dreams”