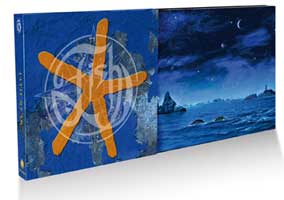 Released as a limited edition in September of ’07 and a world release this past February, 13th Star may be Fish’s best solo album to date.

From the opening track “Circle Line” to the closing track with the album’s title, 13th Star is a voyage of one man’s rocky journey though life.  With the unversal themes of love, hate and everything in between, Fish and cowriter Steve Vantsis make it all sound fresh and original. That is Fish’s greatest strength with his lyrics; his ability to take tried and true themes and make them his own. Written and recorded in the midst of a relationship breakup, Fish has never sounded better. At 50, his voice isn’t what you remember from his time with Marillion in the early 80’s but it doesn’t need to be. He retains all the emotion; the love, the heartbreak, the hope and yes, the vulnerability (his voice clearly cracks with emotion during 13th Star) that very few possess in this day and age.

I’ve spent a couple of months on a podcast binge and haven’t given this a play since his Hollywood gig back in June, and it amazed me just how much of an impact it carries. 10 tracks, spanning 56 minutes or so and not a wasted note, or lyric in that time.

With a new single on its way (Zoe 25), 13th Star shows no sign of slowing down. For anyone interested, the limited edition (which includes a 64 minute making of DVD) and standard edition can be purchased from his website, www.the-company.com.